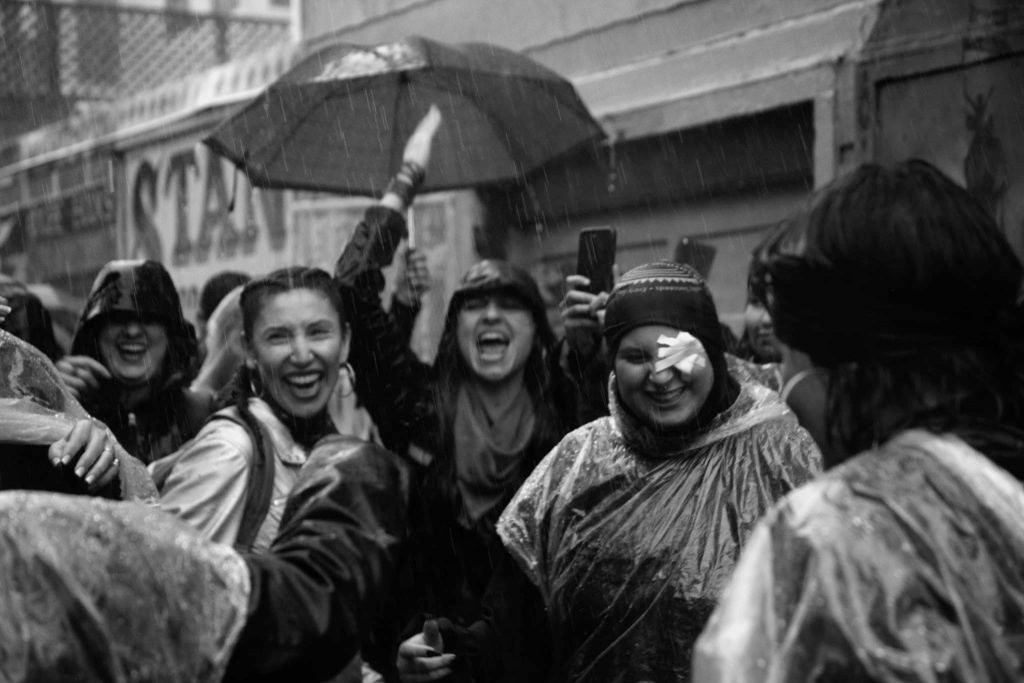 Sisterhood in the rain

I tried to remember how I first came across this and I can’t tell. I looked through my Whatsapp threads but I found nothing that was a direct link to them. It must have been Monday, November 25, 2019, because I told my friend Alex about having woken up dreaming about it and I spoke to him on Wednesday before Thanksgiving, so I needed at least one night to have had the dream before I mentioned it. Could have been Tuesday, I guess. At any rate, Las Tesis (or #Lastesis at this point) did something absolutely amazing last November and we will probably be hearing about it for a long while. Let me start at the beginning.

Since the “social outburst” aka revolution started in Chile last October, I obsessively fell into an interwebs hole tracking the destruction, the art, the death, the humor, the violence, and the hope. I came really close to just getting on a plane and going down there, but my cousin the journalist helped me realize that I wasn’t gonna miss anything if I waited til the holidays in December as I had originally planned, that this was gonna be a long simmer, that it was definitely marathon – not sprint – material. And that everyone I knew was safe enough.

So for 2 months I was absolutely glued to my screen. I remember running into my friend Annie at the typical end of year non profit soiree and literally telling her that I couldn’t really catch up with her cause I was tracking the Chilean news. It was bad.
That’s how I came across this, I’m sure it wasn’t hard, it went viral pretty much instantly and I was constantly on the phone. A bit over a month into my new phone addiction, I came across a super rough version (which I wasn’t able to find again, bummer), of the following video:

It stopped me dead on my tracks. It genuinely moved me. I found out that it was created by Las Tesis, the art collective formed by four Chilean women: Sibila Sotomayor, Daffne Valdés, Paula Cometa, and Lea Cáceres. It’s called “Un Violador en tu Camino” (A Rapist in Your Path) which is a play on the slogan used by Chilean Cops in the 80’s  – “A Friend in Your Path”. Why cops needed a marketing campaign with a slogan is a whole nother story for another time. It cracked me up tho.

Back to the performance.

First of all, that beat! That beat gets in your head and it’s hypnotic and sticks to you like bubble gum. This is not a song, it’s a jingle. Brilliant! We need songs of liberation and empowerment to be jingles, godamit! So we remember them and we never get them out of our heads.

And then, the words. Oh my, the words. So freakin’ straightforward, there is something very “Emperor New Clothes” about the words. Like the child innocently pointing out that the emperor is, in fact, naked, Las Tesis simply state: El violador eres tu – the rapist is you. Yeah, women aren’t raped as much as men rape women. Subtle grammatical difference but profound in terms of understanding that ending violence against women is largely up to men. Women can do a better job of raising men, this is true, but men cannot be excused for inhumane behavior with some stupid rationalization like “but what was she wearing”. She was wearing nothing at all or anything she wanted, and I guarantee it was not a sign that said “exert power and be violent towards me”. “Rape me” said no woman ever. I hope that’s clear.

And that’s what so beautiful about this piece of performance art: the message is so crispy clean, so transparently clear, that it sends a chill down your spine. And it has so many layers. If you have no Chilean point of reference, it works really well as an anti-violence feminist anthem. It’s memorable and sticky, and easy to remember, and dare I say it, fun. The part that goes “Y la culpa no era mia, ni donde estaba, ni como vestia” (And the fault wasn’t mine, neither where I was, nor what I wore) is what I dreamt about that night I mentioned to Alex on the phone – I woke up in the morning singing along to that section after having heard it ONCE. Damn, that’s powerful.

But wait, there’s more. Once I saw the women squatting during the song, I instantly got the reference (I had been reading about women being arrested, stripped naked and made to squat by the cops). Fuck, that broke my heart to see. And then, the uber creepy lullaby about a cop looking over a girl’s slumber is l-i-t-e-r-a-l-l-y taken verbatim from the words to the Himno de los Carabineros de Chile (Chilean Police Anthem). How freaky is that shit?!?!?! But yo, Las Tesis didn’t make it up, they just pointed it out.

Over Thanksgiving break I saw the performance go viral all over the world and knew that I had to be a part of it. Luckily, my gal T took over that job in the Bay Area, so I didn’t need to organize the whole thing from scratch and I just showed up to rehearse and perform. That day it rained the tears of every woman who’s been hurt throughout the history of mankind, and by the time I got home from the third location where we performed, I had to wring out my underwear. There was something super powerful about publicly expressing that patriarchy is just seriously not working for us. And the freezing rain was a minor inconvenience compared to the shit we have to put up with on the daily, just because we were born female.

Enough already. Art will help us get there, I have no doubt.

Thank you #lastesis, you have channeled a piece of our liberation.

By the way, if you are in the San Francisco Bay Area, you can see our local #lastesis opening at the women’s March this Saturday. I, unfortunately, won’t be able to make it (I committed to a year long meditation thingamajig that starts this Saturday), but I think it’s telling that the pussy hats invited the brown sisters to open their party. And that even Harvey Weinstein had to hear about us.