It wasn’t peace, it was silence. 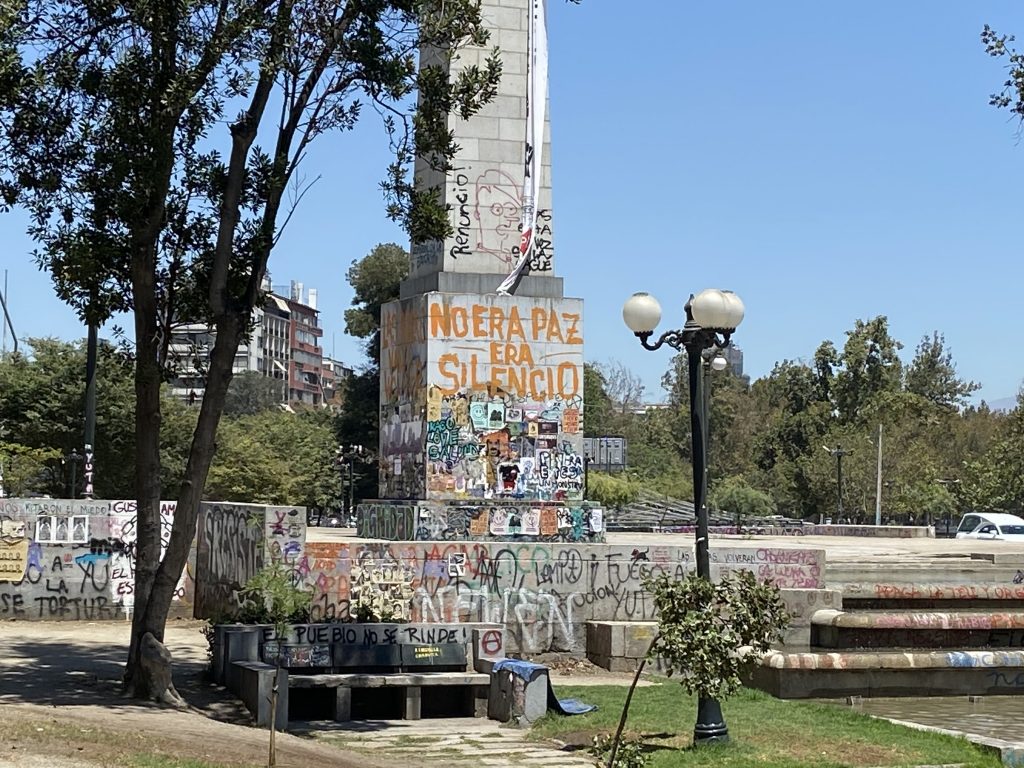 It wasn’t peace, it was silence

As I wrote about here, Chile is going through a really interesting process of trying to figure out how to reinvent itself in a way that most of its citizens can live with. Quite literally – many of the conditions folks are trying to change make living extremely hard, and poverty will kill you when it gets really bad. As will the loss of hope.

I was lucky enough to spend a couple of weeks there in late December/ early January, and I have way too much to say about it, but I will spare you for now and just start with a beautiful little sample.

Walking around Santiago, so much of the place has been destroyed, it’s heartbreaking, and a fair amount has been graffitied over. Like, really, most of the city. A lot of it is angry, and straight forward (“fuck the police”, or “ACAB” – all cops are bastards, acronym which is omnipresent on city streets despite it being in English, go figure), but some of it is poetry.

Actually, most of it is poetry. The art that has emerged during the last few months should be award winning. It is profound, well crafted, and moving. So much of it is aesthetically beautiful. But what caught my eye was a very brief, simple phrase, that was not adorned in any way by the way it was painted on the wall. No. It just stood there, in all its simplicity, with no need for ornamentation because truth can just be, and move you to tears when it’s so revealing that it shakes your bones.

This wall simple read: “It wasn’t peace, it was silence.”

DAYUM. It wasn’t peace, it was silence, is an obvious reference to the political situation there and the desire to go back to a more peaceful state of things. I get it. I don’t want folks to get hurt, I don’t want to have to walk 4 hours across town cause there’s no public transport system available, I don’t want to not have the basics, like, oh…the rule of law.

But what this simple phrase is revealing is that there is really no peace to go back to, just the silence of those that were getting the bill of “keeping the peace” and paying for it with their own bodies.

Quite frankly, when I laid eyes on that paint, I instantly got the bolt of recognition of how many times I may have kept silent because I was trying to keep the peace, not wanting to face the fact that in unspoken truth, there can be no peace.

I thought of all the women I met when I was volunteering at a domestic violence shelter that told me about how they tried to manipulate their partners into not hurting them by keeping silent.

I thought about how surprised we all seemed by the #MeToo movement, when the only real surprise is that we were able to keep silent for so long.

I thought of all the great ideas I haven’t shared at jobs because I‘ve had to think about how to present them so I can actually work on them without my boss getting intimidated or upset that I want to do good work.

Keeping silent has been a strategy of resistance for the oppressed for millennia. And there’s no judgment in that, we do what we need to do to stay alive and try to improve our lives.

But make no mistake. Never has it ever ever ever been the case that silence meant peace. True peace is loud with the sounds of children and women laughing, the echoes of truths being spoken freely, and only the silence we find in awe of one another.

Let’s not forget this.