Botox is the new black: On Vanity and Resistance 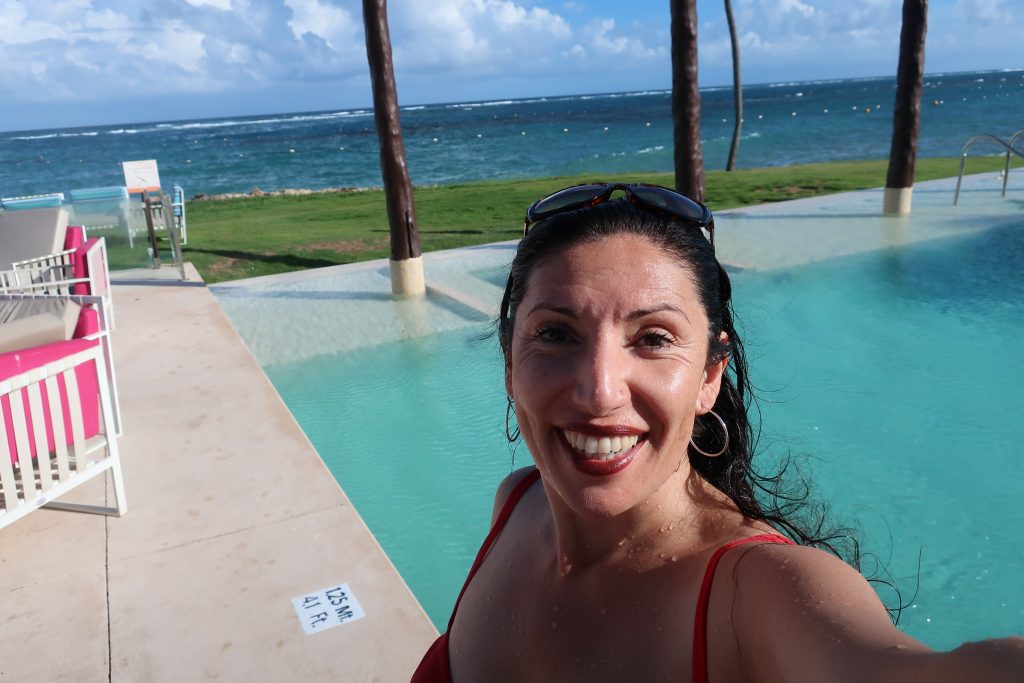 This is what Botox-free a.k.a. wrinkled AF don’t care looks like.

I’m a middle-aged (44 to be exact), Latina, single, straight, cis woman. All these things have mattered when it comes to my relationship with my appearance. As a proud rebel, I spent my first 30 years on Earth not giving a shit about my looks. Actually, not wanting to look like I gave a shit about my looks, so kinda disheveled, kinda tomboyish, kinda wearing whatever was gonna make sure I could run from the cops just in case the need ever arose.

Then, the genetic charge of the women in my family took over, and I wanted to look nice, and pretty, and so I started wearing lipstick pretty consistently, and a few years ago, even mascara most days. I feel so put together! So produced! I like it. Like I care about me and I like looking good. Awesome. The next step was putting stuff on my face to make sure I don’t look like a raisin too soon, cause I love the sun above all things and I try to be in it as much as a human in the early 21st Century with a computer job can, which ain’t that much, but still. That’s when I discovered the planet of “skin care”, including facials (which is when you pay someone a shitton of money to put cream on your face – wtf?!?!) and heard about even more drastic things, like Botox.

OK, Botox is a chemical that you INJECT in your face and it smooths out wrinkles. Allegedly it works really, really well, and it has become the total norm amongst my crew: professional middle-aged women. Like, they all do it. Well, 9 out of 10 I would guess, anyway. There’s no stigma to it, no one thinks it’s weird, women just go right the fuck ahead and inject a PARALYZING TOXIN into their third eye so they don’t look like “they’re frowning” all the time.

That’s the explanation I’ve heard from those who admit to it. A bunch of them still wanna make you believe they just “woke up like this”, with an unnaturally smooth forehead that is looking less and less unnatural every day as more and more women include it as part of their beauty practices.

So, I’m jealous. It is true that the wrinkles are gone with this treatment. It is also true that I’m vain as fuck and would love to not have any wrinkles, especially not on my forehead where you “just look tired” or “angry” even when you’re not (that’s what the Botox peddlers pitch, at any rate).

But this is the thing: if there’s a weird side effect, Imma be the lucky one to get it. If I were to ever try Botox, I’m pretty sure I would be bruised for like 2 weeks flat, looking worse than pre-treatment. Also, it ain’t cheap, and as an activist without a trust fund, I can think of better uses for my money. But most importantly, I am a feminist and a spiritual seeker, and the mass adoption of injections of a paralyzing toxin into the exact spot on our body where we connect to the divine, where our intuition is said to sit, where we can channel visions from other realms, does sound a lot like a conspiracy. I’m not suggesting it is, but to paralyze women’s third eye is a metaphor that is too powerful to ignore.

In these times we need all of the feminine wisdom, all of the sacred messages, all of the transformative visions we can get. And while I don’t really think Botox literally gets in the way of any of that, I’m not willing to chance it. Because metaphors are powerful, and words create reality, and I’d rather look like I’m tired and angry even if I’m not really any more tired and angry than any healthy woman living in the industrialized West would be…Imma gonna have to live with the fact that I’m more wrinkled than I “need” to be because I refuse to change my interface with the Goddess, even if I know it transcends physicality.

PS: If you use Botox, yeah! You probably look amazing – no judgment. And also: don’t tell me how much better I would look if I did, please and thank you.